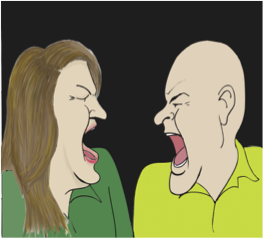 Defensiveness can come in many forms. Stating clearly that you did not do something and listing the reasons may be defensive. Counter accusing your spouse with something that they did not do as well is defensive. A spouse might say, “I noticed that the grass is not mowed and is really getting tall.  Would you mind mowing the grass today or tomorrow?” And the defensive response might be, “I would have mowed the grass sooner but you said you would start putting your shoelaces in the closet instead of leaving them all over the house.”

What Can I Do About Defensiveness?

Sometimes the reason for the defensive posture of your spouse may be the way the issue was brought up. If you can find a time and place that works best for the two of you to have the conversation, you will probably find a more open conversation that focuses on true resolution of the issue.

The most important thing you can do is to use language that does not encourage defensiveness. The Compliant Formula is an excellent tool to bring up an issue that will probably not deploy the defensiveness of your spouse. Using your Speaking and Hearing Truth skills will also help you have the issue resolving conversation you are hoping to have.

If you are an active user of defensiveness, you are hurting your marriage. You may believe you are protecting yourself or even protecting your spouse, but using defensiveness over time takes an incredible toll on the relationship.  When you are defensive, the issue is not resolved which results in you having the accusation brought back up again at a later time, inflicting more pain.

One of the first things you can do to limit your use of defensiveness is to watch the type of language you use that gets in the way of really hearing and respecting what you spouse is saying about the issue they are bringing up.  Frequently, people who use defensiveness hear themselves say the following phrases:

“You are blowing this way out of proportion…”

When you hear yourself using such phrases, you are likely using defensiveness to side step responsibility for the issue being raised.  Instead, consider some of these phrases:

“I can see how you would feel that way…”

“The part I agree with is…”

“I want to give that some more thought…”

“I agree with part of what you are saying…”

If you find yourself wanting to bring up a counter accusation, do everything you can to prevent this. Do not bring it up in the conversation. If you need to write it down to discuss at a later time with your spouse, do that as soon as you can. Trying to have a conversation about multiple issues at the same time is rarely productive.  Put it in the “to discuss list”, not in the conversation, and revisit it at a later date.

This article was written by Roy and Devra Wooten, authors of “The Secret to a Lifetime Love”. Learn more at www.LifeTogetherForever.com © Roy and Devra Wooten 2014. All Rights Reserved. You may replicate this article as long as it is provided free to recipients and includes appropriate attribution. Written permission for other use may be obtained at Secret@LifeTogetherForever.com.

Comment1 | Share | Tweet | Share | Pin It | +1 | print | email
Category: Creating The Marriage You Want
Disclosure of Material Connection: Some of the links in the post above are “affiliate links.” This means if you click on the link and purchase the item, I will receive an affiliate commission. Regardless, I only recommend products or services I use personally and believe will add value to my readers. I am disclosing this in accordance with the Federal Trade Commission’s 16 CFR, Part 255: “Guides Concerning the Use of Endorsements and Testimonials in Advertising.”

One thought on “Why Being Defensive Kills Marriages!”